The T&T Group, a Vietnamese industrial, real estate and finance conglomerate, has signed a contract to purchase 176,000 tonnes of Tanzanian raw cashews from the 2018 crop with Tanzania’s Cereals and Other Produce Board.

This is the historical largest raw cashew purchase contract in the the global cashew industry, bringing a wealth of cashew nuts to the Vietnamese cashew industry. Hence, the Tanzania President directly instructed the Tanzania Ministry of Commerce to follow this agreement. 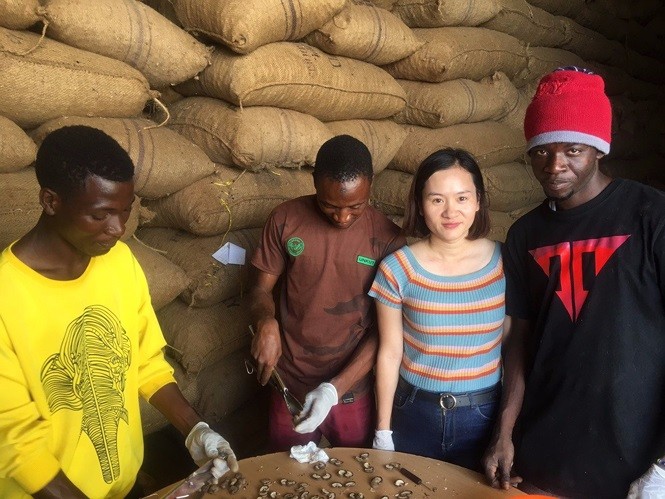 (Inspection the quality of raw cashew)

As a result, this contract will affect Tanzania’s export revenue as well as most cashew importers globally.

The first shipment of this agreement will reach Vietnam in the first week of September 2019.

As a country that imports raw cashews and is the largest exporter of cashew nuts in the world, Viet Nam plays a coordinating role as a bridge to build a global value chain for the cashew industry among countries that provide raw cashews such as the Ivory Coast, Nigeria, Mozambique and Benin.

Viet Nam produces and imports about 1.6 million tonnes of raw cashews per year. However, the total supply in domestic is nearly 25 per cent of required. This causes severe raw material shortages for Vietnamese cashew producers.The majority of raw cashews still depends on imports from African countries.

(The warehouse for raw cashew nut)

The contract with Tanzania not only brings a plentiful source of raw cashews for the domestic cashew industry but also reinforces the position of Viet Nam as a raw cashew importer and the largest cashew kernel exporter in the world, accounting for 60 per cent of global production.

5 months ago, on March 20, the T&T Group signed the first contract on the purchase of 50,000 tonnes of raw cashew with a group of cashew exporters from the Ivory Coast !

Tanzania accounts for 75 per cent of raw cashew nut production in East Africa, exporting an estimated 250,000 tons annually. The contract is within the framework of the T&T Group’s long-term cashew nut production and trading project. Its other traditional markets in Africa are the Ivory Coast and Guinea-Bissau. With raw cashew from Africa as material, Vietnamese producers are helping consumers to use Cashew Kernel at more and more competitive price !